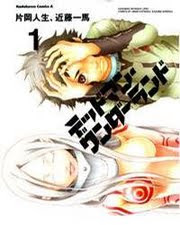 Deadman Wonderland; a new prison in which the prisoners are forced to fight each other with nothing other than their own blood.

Ganta Igarashi, the story's main character, has been convicted of the murder of all his classmates. He meets a weird girl named Shiro upon entering the prison park; however, Shiro isn't what she appears to be.

The manga, IS (Aiesu), starts off with the story of an intersexual person who is raised as a girl but was born genderless. The character, Hiromi, chooses to move around a lot because she feels insecure about how people do not know that she is actually genderless. As Hiromi develops feelings for a man that has feelings for her, she is struggles to decide whether she should continue being an intersex or get a sex change before the man she loves finds out about her gender.

Some of the chapters in the manga carry stories of different intersexual characters and the stories of people who struggle accepting the concept of intersexuality. I really like how every chapter develops and how each intersexual experience their struggles to fit into society. The chapters on people learning to accept intersexuality are also great reads. The character situations feel very realistic and the characters' developments are often heartwarming.

Strays follows a female lupian --a race of humans with wolf-like features-- and her journey through the once thought peaceful land she knew. Sounds like a serious story, right? Well, Strays has many moments of humour, sadness, and happiness.

The comic is created by Samantha Whitten and Stacey Pefferkorn. Both are artists with exceptional talent (which would explain why the comic looks professionally done).