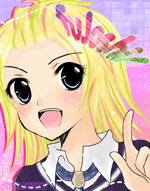 When you have an average high school boy who wants to get closer to his high school crush who's an eccentric yaoi fan girl that always spreads rumours about him being gay, which he is not, but has to lie that he is gay so that he could stay friends with her, you get Fujoshi!

The story combines shojo and shonen-ai themes into one humorous, heart touching, chest pounding comic. Fujoshi! is by Smackjeeves user Neko-Kurai. The comic began mid-June 2008 and supposedly ended late April 2009 until a recent announcement about its revival coming in December 2009.