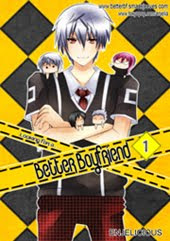 I've always wanted to read a comic about a girl who turns into a boy and a boy who turns into a girl and they both would have never got to know each other if they weren't in the same situation.

Better Boyfriend adds to that scenario with a father who openly loves his daughter too much, a cheerful mother that caused her own daughter to turn into a boy, and an odd grandmother that turned her gang leader grandson into a girl. While the mother and grandmother try to figure out an antidote to the main characters' transformation, Jun and Yupi, the er... heroine and hero (?), have to deal with living as the opposite gender at their high school. As for why the title is what it is, read the comic to find out!