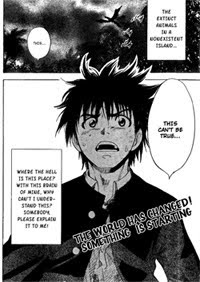 If you've ever read Lord of the Flies by William Golding, you may enjoy reading Eden no Ori. Also known as Cage of Eden, the manga has a storyline and characters roles similar to Lord of the Flies. The differences between the two are that the manga, being a manga, provides fanservice with its many high school female and male characters and sets the danger to the island to an all time high with deadly prehistoric lifeforms.

I have plenty more questions regarding to the manga but they will have to wait until the scanlators or Kodansha USA finish with it.